Our dearest and closest friends Richard and Brian passed away in the February and July of 2017, within twenty two weeks of each other. After forty seven years together it seemed they were destined never to be apart. It doesn’t seem possible, and now, already months down the line, we struggle to come to terms with our loss. As executors, our responsibilities have been extensive, and at times difficult, of course. Clearing a house of so many memories is a challenge, both physically and mentally. And on top of this, the extensive garden surrounding the property needs to be maintained.

We started tending the garden in January 2017, just after Brian was diagnosed with multiple cancers. Richard had his work cut out looking after Brian, who wanted to be at home for his final days, so they asked us if we’d look after the garden. Four man-hours on a fortnightly basis seemed most appropriate. Initially we spent our time mowing, pruning and shaping shrubs and conifers in order to claw the garden back from Mother Nature, who had already made a tentative start to claim the garden back as her own.

Richard loved the garden, but by his own admission, the back garden, in particular, needed something doing to it. My offer to redesign the garden was accepted, without hesitation. It’s a largish garden that wraps itself around the back and the east side of the house. South facing with a sliver of a border around the perimeter. Conifers, a handful of overgrown Fuchsia magellanica shrubs, and a large collection of hebes form the mainstay. Adjacent to the property, and again abutting the back and side, a rather mean pathway, for the size of the garden, which widens outside the lounge and dining room patio doors, for seating and entertaining. A carpet of daisies masquerading as a lawn between pathway and borders. Along the east side of the house, a wooden, windowed potting shed. A plastic tool shed too, that should have been consigned to history a good few years ago. 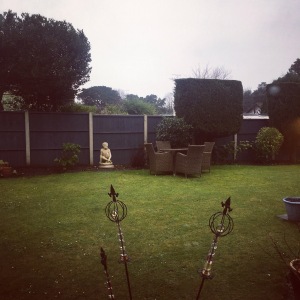 a week I had measured, reviewed and designed Richard’s new garden. The existing pathway around the house to be widened to two metres and to be laid in grey, limestone paving. A six meter, circular, patio in the same limestone leading leading directly out of the dining room with a two and a half meter, circular hard standing for a summerhouse/office. Two circular lawns on either side of the patio interconnected with rectangular lawn ‘pathways’.

Around the side of the house a further circular lawn just in front of the wooden potting shed. Generous planting borders to surround the lawns around the garden, which due to the aspect will provide for both planting in full, glorious sunshine and shade, which I am well practised in planting for.

Richard loved the proposed design and within days of agreeing to proceed I arranged for quotes to build the garden. Unbeknownst to me, in sheer excitement, Richard arranged for a mutual friend to lift the existing patio. I was astounded to return a few days later to see the rubbled remains of the old patio. The garden was not due to be built for a further six to eight weeks. Sadly, Richard passed away a week or so before the scheduled start date, so we cancelled the build.

Summer burnt itself out and we found ourselves, unbelievably, in a cool and rather damp September. We continued to maintain the gardens both at home and High Haven. And the, in early August, we were summoned to Richard’s solicitor.  We were told that we had been left Richard and Brian’s house.  After much deliberation and soul searching, we sold our own little haven to a buyer keen to take on the bungalow and our beautiful gardens.

Freelance gardening writer, consultant and designer. Mike Palmer is a passionate and professional plantsman, offering services in garden writing, consultancy and garden design. Mike is also available for garden and plant related talks and presentations. Mike has been a professional horticulturalist for over fifteen years. View all posts by Mike the Gardener

Join 3,083 other subscribers
Follow MIKE THE GARDENER on WordPress.com